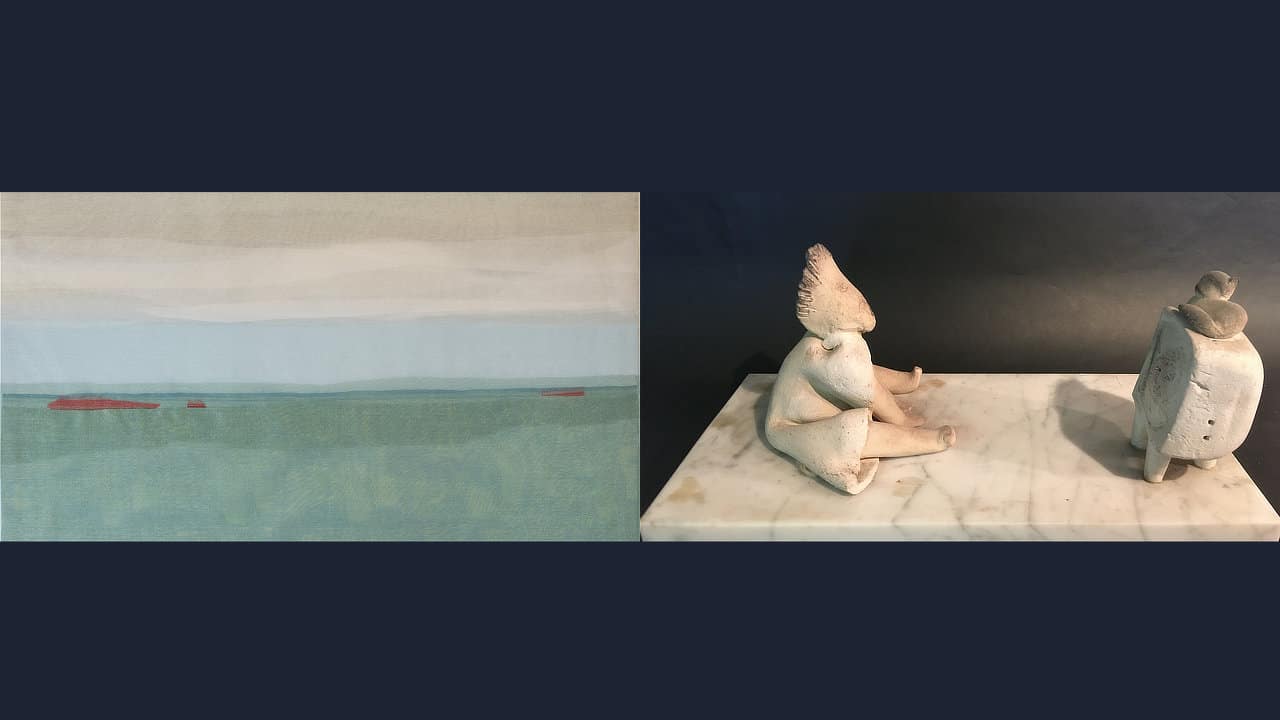 In the upper room of Museum Valkenburg a duo exhibition of Janneke Laheij and Rob Stultiens can be viewed from 28 June to 20 September 2020.

Janneke Laheij (1946) studied at the Maastricht Art Academy and obtained her first degree in Free Textile Teaching Methods in 1972. She exhibited in various galleries in the Netherlands, France, Switzerland, Ireland and in the Musée l’Hospice Comtesse in Lille / France. During her studies, Janneke developed a technique for making self-dyed fabric collages, which later worked with chalk. In the 1980s she resumed painting and was mainly concerned with her greatest fascination; the portrait.

Over the past ten years, she has returned to textiles and developed a new technique with which she made portraits with transparent fabric, which for her were richer than the painted ones. The combination of years of ability to paint a ‘palpable’ good portrait with oil paint and the new possibility to reach another dimension through the typical properties of transparent fabrics, enable her to create a ‘moving’ representation of someone’s personality in which the constantly changing light yields surprising added value. In addition, Janneke has been working on so-called ‘canal portraits’ and since she has been living in France on ‘mountain portraits’, trying to capture the specific properties of both landscapes, evoked in particular by the atmosphere there and caused by changing weather conditions. .

Rob Stultiens (1922 – 2002) a pupil of Charles Vos at the High School of Applied Arts in Maastricht, continued his studies with Piet Esser at the Rijksacademie van Beeldende Kunsten in Amsterdam (1946-1948) and with Oscar Jespers at the Jan van Eyck Academy in Maastricht. His versatile oeuvre includes sculptures, monumental work and small ceramic sculptures. He received the Hustinx Prize in 1969. In honor of the celebration of his silver jubilee as a sculptor in 1976, a retrospective of his work was held in the Bonnefanten Museum in Maastricht. He has exhibited in Belgium, Germany, France, Austria and the Czech Republic, and in dozens of locations throughout the Netherlands. Rob Stultiens called his work “Rob Art”. And, as the Limburg poet Leo Herberghs translated his romantic desires into poetry in his poetry collection “With earthen fingers” (1955), so Rob Stultiens “wrote” his own ceramic book; a “lyrical collection of poetry of earth”. Sometimes he could, as it were, be in a ceramic whirl. Then he had to express the poetry and dreams that lived in him. Nervous, not knowing anything to stop, he was busy making one image after another and adjusting the clay to his own taste. A poetic ceramist who was led by eroticism and religion that he connected. In the past he had mainly sought large forms; through the small ceramic images that emerged in later times, he showed himself to be the breed storyteller he was by nature. The exhibition at Museum Valkenburg therefore includes a selection from this small ceramic work.