The Bon Vivant and the Realist

In the period from 5 May to 11 August 2019, in collaboration with the Jacob van Horne municipal museum in Weert. Museum Valkenburg bring together for the first time the work of two artists from Weert: Jan Tullemans and Wil Leenders, the “Bon Vivant” and the “Realist.” Friends of art who, while studying together at the same art academy, each went their own way in the art world of their generation. Part of the works by Jan Tullemans comes from the private collection of Frans Hovens. The works shown by Wil Leenders are composed from the collections of his children, from private collections and there are also loans from the Jacob van Horne municipal museum.

Jan Tullemans took private lessons with the painter Jan as a mulo-student Nouwen. He learned there how important the perception of visible reality is for an artist. Seeing things, their colors, shapes and light had to be the starting point for a drawing or a painting. After Nouwen had left Weert, he took painting lessons in the evenings at the Institute for Visual Arts in Roermond. Artists that served as role models at the time were people like Leo Franssen, Piet Schoenmaeckers, Joep Thissen and Mathieu Boessen. With Piet Schoenmaeckers, Tullemans took drawing lessons at the Jan van Eyck Academy in Maastricht, where he graduated in 1958. Here he also met Wil Leenders and became friends with him. In Jan’s early work, robust landscapes can be seen with dark hues set against subtle white. With the “progress” life in Weert became lighter and with it the work of Jan Tullemans. Domestic scenes arose around the table and bed with the daily pleasures of life. If Jan did not paint, he drew. All day long, almost carelessly, he scribbled down what he saw around him. Father Tillemans (Jan’s cousin and also an artist) once said to him; ‘if you are in your box later, you can still draw on the bottom of the lid’. Jan became known in his role of ‘nestor’ of the art scene in Weert. Jan Tullemans as the “bon vivant” of cultural life, Jan Tullemans as “the King” in his own story. 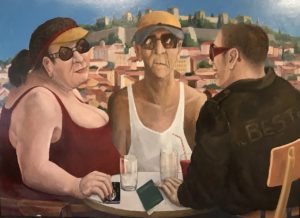 Wil Leenders grows up in a family where visual arts play no role and he has difficulty getting permission to go to the High School of Arts in Maastricht. After his military service he goes to the Jan van Eijck Academy in Maastricht. There he learns the profession of ‘monumental glazier’. His teachers are Willy Gorissen, Jef Scheffers, Charles Vos and Harry Koolen. At the academy he meets Jan Tullemans and a close friendship develops. Since he cannot live by his art alone, Wil is a teacher of drawing and crafts until his retirement, first at the institute for the deaf in St. Michielsgestel and later at the Jacobus Mavo in Born. The early work of Leenders fits in with the tradition of the old ‘Limburg school’ with influences from France and of the ‘Latem School’, of which Permeke is the best known. At the end of the 1970s, Wil started to work in a more realistic way. He opts for everyday themes such as portraits, still lifes and landscapes. In the 80s and 90s he became best known as the painter of naturalistic winter landscapes. As a counterpart, he makes portraits, especially of family members. In later portraits he is inspired by photos of ‘normal characters’ seen during his travels through Europe. This expresses his ‘essential vision’ of man and the relationship with his great examples Pyke Koch and Dick Ket is clearly visible. Before Wil Leenders died on November 20, 2017, he was informed about the presentation of his work in the Jacob van Horne municipal museum, which thereby acquired the character of an ‘in memoriam’.