Spotlight: ‘No Future’ young people on a Valkenburg terrace (1983)

Home>News>Spotlight: ‘No Future’ young people on a Valkenburg terrace (1983)

Spotlight: ‘No Future’ young people on a Valkenburg terrace (1983)

The fascinating photo exhibition ‘Faces of Valkenburg’ can be seen in Museum Valkenburg from 5 March to 22 May 2022. The exhibition is based on the photo book of the same name by the Valkenburg-born writer-journalist Hans Hoenjet (1953). He collected photos from the archives of the Nederlands Fotomuseum, Spaarnestad and other photo collections, some of which can be seen in large format in the museum.

The 1980s certainly did not shine for optimism. It was the decade of punk, ‘Ban de Bom’ and ‘No Future’, a period marked by mass unemployment and pessimism. In 1985 the Rijksmuseum in Amsterdam commissioned the photographers Maya Pejic and Han Singels to show in 100 photos how young people shaped their own lives. The exhibition took place in the summer of 1985.

For two years, both photographers visited pop concerts, youth festivals and discos in the province. They took photos of the eviction of a squat, beautifully dressed punk girls, a chic party of a student corps and young farmers.

During this photo project, social photographer Maya Pejic (1935) also ended up in Valkenburg and found a cheerful group of No Future youngsters on a terrace. Full of bravado, the youngsters clad in black leather jackets look into the lens, while rowdy drinking a glass of beer, chaperoned by a cheeky diva.

“Young people hang out in groups,” Maya Pejic said of her photos. ‘There are few young people who don’t have friends.’ And she also noted: ‘I myself often experienced that young people looked very cheerful into the lens, but behind such a picture there was often a lot of misery.’

Would she have experienced that feeling with these punks too? It wouldn’t surprise me, because in addition to being a photographer, she was also an anthropologist, so she had a keen eye for what could be hidden behind a superficial grimace.

View these and many more photos in the exhibition: https://www.museumvalkenburg.nl/agenda/foto show -faces-of-valkenburg/ 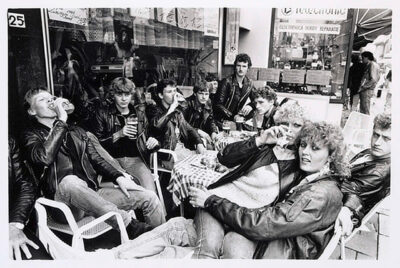