Who was Gertruide Bosch? What is the symbolism in the painting “Bokkenrijders”? And why are the paintings in the Museum Valkenburg?

Bok hysteria – Willem Vermeer
“The whole subject of the Bokkenrijders remains a mystery. Did they exist? With how many were they? Who were they? What was their purpose? How could they move so quickly? The people of this region were at least terrified of The strangest stories circulated, which you have to give a place at a time when people sincerely believed in ghosts and witches and other inexplicable creatures and conditions.
For example, they thought that goat riders were moving through the air, sitting on the back of a goat … ”

Bokkenrijders – Danielle de Warem
“A painting full of symbolism: 3 people, two goats and the southern part of Limburg merge into 2x a 3 unit of light and dark … or …. is it just imagination and we see what we want, think or believe see?”

Lower Bottom – Gertruide Bosch (pseudonym for 15-year-old D.M.)
“The gang members who had to take an” oath of allegiance “to their leaders were often at the bottom of their experience. They had joined the secret society. The Bokkenrijders.
Look and discover what the dark has to hide. ”

The works were made for an auction organized by Bok & Kunst. This year the proceeds are intended for lonely elderly people in Valkenburg. 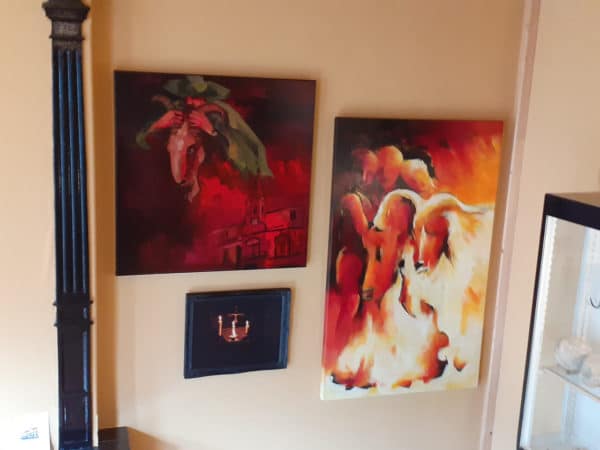