Geert Meijer (Groningen 1937) studied at the Free Academy in Amsterdam and then at the Jan van Eijck Academy in Maastricht. In the year of his graduation (1964) he became a member and also co-founder of Artishock, the movement that resisted the prevailing art climate in Limburg and the lack of exhibition space for young artists. 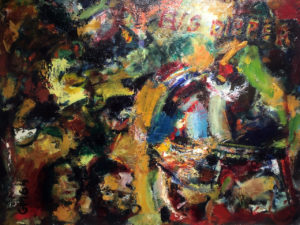 Trained as a figurative painter, he dared, in imitation of the Cobra painters, in that period to non-figurative work (see image).

However, disappointed with the opposition by the municipality of Maastricht and lack of results with Artishock, he, like Lei Molin, turned his back on Maastricht in 1966. Back in Groningen he found employment as a teacher at the Academy Minerva.

When in 1992 both twin sons were killed in a sailing accident, he settled in the south again, in the primary school in Mechelen, which was no longer used as such. He died in Gulpen in 2011.

The work of Geert Meijer and other Artishock artists can still be seen until 22 April 2019, for more information click HERE.