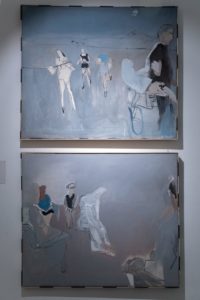 In connection with the Lei Molin exhibition, our museum pays attention to the Artishock art movement.
In 1964 this group of artists was founded in Maastricht on the initiative of Lei Molin and Rob Stultiens. The other members were Harry Marks, Piet Wouters, Felix van de Beek, Ger Brouwer, Ad Visser, Geert Meijer, Leen Kriens and Harrie Bartels. They had all completed their studies at the Jan van Eyck Academie. In addition to the unease about the art climate and failed cultural policy, it was also a protest against the lack of exhibition opportunities in Maastricht. The artists sought a facility themselves and found it on the Jodenstraat. The exhibition space was located on the top floor of a clothing store owned by Mr P. Schunck and was therefore called “ArtiSchunck”.
From the beginning it did not bother between the city council and the Artishock group members. The then-mayor appointed the exhibition space in the city council as “the vegetable hall”.
The alderman would never go there “because he felt embarrassed”.
In September 1965, the City of Maastricht informed Artishock by letter that the exhibition space on the Jodenstraat had to be vacated within six weeks. The building would be flammable and the stairs to the upper floor too narrow.
Disagreements led to five of the eight artists leaving Artishock in November 1965. Although other artists did reconnect, the board announced the end of Artishock on 24 February. The artists’ group formally raised itself. Lei Molin and Geert Meijer even left Maastricht because “they are of the opinion that in South Limburg there can not be a viable cultural climate”.

Works by Lei Molin and other Artishock artists can still be seen until 22 April 2019, for more information click HERE.