The sixth edition of the National Romans Week will take place from 4 to 12 May 2019. A week entirely devoted to the history of Roman times in the Netherlands, with dozens of activities and events for young and old every day.

A continuous exhibition on Roman Valkenburg and Via Belgica

In the Valkenburg Museum you can get acquainted with the tangible Roman past of Valkenburg and the surrounding area. The Archeology department shows an overview of Roman life in the Geuldal. Various archaeological finds from Roman Valkenburg can be admired in the Valkenburg Museum. These objects tell the story about the Via Belgica route. Four locations have been included in the Via Belgica route within the municipality of Valkenburg. The Roman road in Houthem, the villas in the Geuldal, the watchtower on the Goudsberg and a trip to the Roman Catacombs (burial culture). The tangible finds of these places can be seen in Museum Valkenburg, on the first floor. 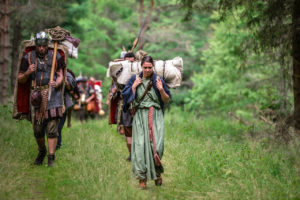 You can taste Roman snacks and drinks, the Optio Centuriae teaches young visitors to march like the Roman soldiers did and Elisia Ferraris predicts the future with sheep bones. Every visitor can be dressed as a Roman photographed in the Roman living room!

Come and take a look on Wednesday in the restoration studio in Museum Valkenburg! Have you always wanted to know how an archaeological investigation works? Or have you found something yourself and want to know what it is? Our archaeological working group deals with various excavation materials from the history of Valkenburg aan de Geul. We examine the remaining material, identify it and restore the objects. Entry 6 euros, children up to 12 years (under supervision) free.