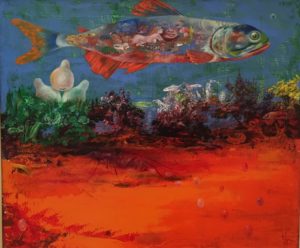 This painting was painted by Melle Johannes Oldeboerrigter (1908 – 1976), the Jeroen Bosch of the Netherlands. A fish with content swims through fertile water.

Let your imagination find its course!

As a teacher at the Rietveld Academy, he initially had to earn his living. To his disappointment, for a major exhibition at the Stedelijk Museum, ten years after the war, three works were rejected by him. They were found to be unsuitable for children because of the genitals depicted. Then the fence was from the dam and he painted more and more phalluses. For him the symbol of the survival of the world. At first this stood in the way of his fame. Later there were so many assignments that potential buyers had to be put on waiting lists. When the internationally acclaimed art collector named Peggy Guggenheim nocked on his door and he opened the door and said: “The painter is not at home”!

In 1972 the Stedelijk Museum Amsterdam awarded him a retrospective exhibition and on the occasion of his hundredth birthday, the Museum of Modern Art in Arnhem organized the largest retrospective of his work.