Spotlight: “The Maastricht area seen through the eyes of others”

Home>News>Spotlight: “The Maastricht area seen through the eyes of others”

Spotlight: “The Maastricht area seen through the eyes of others”

Museum Valkenburg presents in collaboration with the Limburgs Museum the exhibition “South Limburg seen through the eyes of others”. Works from the collection of the Limburg Museum of non-Limburg painters who came to South Limburg are shown. Some stayed for a short time, others settled in Limburg for many years. We highlight a few top pieces. This time….

“The Maastricht area seen through the eyes of others” 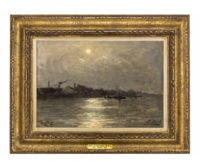 Philip Sadée (1837 – 1904) was one of the artists of the Haagse School. He was fascinated by the beach and the dunes, but he also painted cityscapes. From 1856 he made a series of study trips abroad. Sadée lived in The Hague but regularly visited Maastricht in the summer, where he stayed with his brother. From the second half of the 1880s, he became interested in industrial subjects, of which the painting by Céramique pottery factory (by night) is a good example. 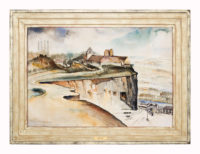 This watercolor by Jacques Mels shows the excavation of the ENCI (First Dutch Cement Industry) in St. Pietersberg near Maastricht around 1930. The ENCI quarry was a large limestone quarry. Fort Lichtenberg lies in the center on the hill with a steep wall with four high towers in the background. Mels followed a training as a house painter in Tilburg. He then became a monk but later resigned and became a painter. He lived in Maastricht, The Hague and Epe and in various places in South America. Mels is best known for its somewhat dark, mysterious and elegantly painted South Limburg landscapes under fascinating cloudy skies. 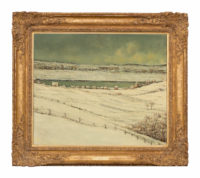 This rolling winter landscape with the Maas seen from St. Pietersberg is painted by Han van der Kop (Schoonhoven 1903 – Amsterdam 1934). There are a row of houses on the snowy bank; On the opposite bank lies the former village of Heugem (now a neighborhood in Maastricht). Van der Kop, who was very talented as a child, was admitted to the Rijksacademie in Amsterdam and won in 1931 the prestigious Prix de Rome for painting. In 1934 he ended his life and a promising talent did not develop further.