Spotlight: Eijsden-Margraten seen through the eyes of others

Spotlight: Eijsden-Margraten seen through the eyes of others

Museum Valkenburg presents in collaboration with the Limburgs Museum the exhibition “South Limburg seen through the eyes of others”. Works from the collection of the Limburg Museum of non-Limburg painters who came to South Limburg are shown. We highlight a few top pieces. This time….

“Eijsden-Margraten seen through the eyes of others”

Limburg artists and artists from elsewhere were not only inspired by the rolling South Limburg landscape but also by the landscape along the river Maas that enters our country at Eijsden. The villages of Eijsden, Oost-Maarland and Gronsveld are located in the Maasdal. Roosenburg, an artist couple from Amsterdam, settled in Kasteel Oost in Oost-Maarland during the Second World War and invited several artists to work and stay here.

Willem Roelofs (Amsterdam 1822 – Antwerp 1847) is counted among the artists of the famous Hague School. He settled in Belgium in 1847 and also traveled to Germany, Scotland and England. He came to the Netherlands for a few months every year. Under the influence of the French School of Barbizon, he regularly set out to paint in nature. This oil painting from 1884 shows the picturesque village of Eijsden. The white house with the long wall in the same color is striking.

Jopie Roosenburg-Goudriaan attended art academies in Rotterdam and Vienna. She moved with her husband, sculptor Teun Roosenburg in 1942 from Amsterdam to Kasteel Oost in Oost-Maarland. This place grew into a well-known meeting place for artists from the North and South of the Netherlands. In this watercolor we see a marl wall at Ternaaien behind a farm with land. Jopie wanted to capture the atmosphere in her landscapes. She died in Eijsden in 1996.

The village of Gonsveld merged with the municipality of Eijsden in 1982 and has been part of the municipality of Eijsden-Margraten since 2011. “View of Gronsveld” was made by Kees Andrea. Prominently present are the undulating landscape and the grain sheaves. In the field to the right men are working with horse and plow. A church tower is visible on the right in the background.
Andrea studied at the Academy of Visual Arts in his hometown The Hague. He traveled abroad and also visited Limburg. In 1942 he made a bicycle tour with a sketchbook in his luggage. He had frequent contact with the artists of castle Oost. 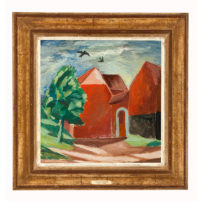 Nicolaas Wijnberg was the son of an Amsterdam master stone printer. During the Second World War he landed in Limburg where he painted many landscapes. He lived and worked at Kasteel Oost during that period. Later he was part of the “De Realisten”, a group of artists who focused on figurative art and opposed the abstract art of Cobra. He painted this “Hoeve in Eijsden”. The basic pattern of this farm is square, parts of three sides are visible. The work is very colorful and has a sign-like shape.