Spotlight: Maastricht seen through the eyes of others in the 19th century

Home>News>Spotlight: Maastricht seen through the eyes of others in the 19th century

Spotlight: Maastricht seen through the eyes of others in the 19th century

“Where in ‘bronze green oak’ is the South Limburg landscape has been a source of inspiration for artists for centuries. 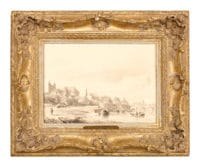 Museum Valkenburg is now presenting the exhibition “South Limburg through the eyes of others” in collaboration with the Limburg Museum. Works are shown from the collection of the Limburg Museum of non-Limburg painters who came to South Limburg and were inspired by the landscape. We highlight a few top pieces. This time this brush drawing by Cornelis Springer from 1844, the Onze-Lieve-Vrouwebasiliek and the Sint-Servaasbrug are depicted.

Springer lived in Amsterdam but traveled around to make sketches. He initially painted landscapes, but later focused on city and village views. On the right the Maas with some sailing boats. A ship is lying on its side by the shore. The water in the Maas is low: horse and carriage cross the river. 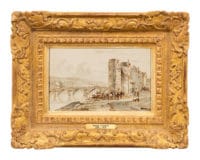 The Sint-Servaasbrug was a popular subject for artists in the 19th century. This drawing by Willem Bodeman from 1830 shows the bridge and two towers of the water gate with a cart with horses in front of the gate. Bodeman was the first student of the famous landscape painter Barend Cornelis Koekkoek. Between 1827 and 1830, Bodeman traveled with his teacher through Belgium and Germany.