Spotlight: Maastricht seen through the eyes of others in the 20th century

Home>News>Spotlight: Maastricht seen through the eyes of others in the 20th century

Spotlight: Maastricht seen through the eyes of others in the 20th century

“Where in ‘bronze green oak’ is the South Limburg landscape has been a source of inspiration for artists for centuries.

Museum Valkenburg is now presenting the exhibition “South Limburg through the eyes of others” in collaboration with the Limburg Museum. Works are shown from the collection of the Limburg Museum of non-Limburg painters who came to South Limburg and were inspired by the landscape. We highlight a few top pieces.

This time this oil painting by Bernardus Cornelis Noltee we see a team of three horses at work. A man leads the reins, two others behind the tension hold a beam. The Sint-Servaas bridge and row of houses are in the background. Noltee (The Hague 1922 – Dordrecht 1903) was inspired in his early days by the Impressionism of the Hague School. 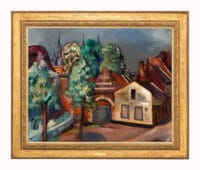 Matthieu Wiegman painted the guard’s house on the Tongersestraat in 1920. The cottage, built in red brick, is somewhat to the rear. In the background three church spiers, partly hidden behind houses and trees. Wiegman, born in Zwolle and living in Bergen, regularly came to Limburg. The un-Dutch landscape reminded him of France. 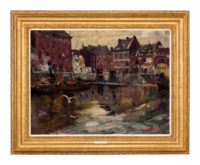 We recognize the Bassin in a painting by Harry Lips from 1948. The dark tones predominate. Two boats in the water, the boat on the right only partially. Smoke comes from the chimney of the boat on the left. We also see landing quays with stairs and higher-lying houses. Lips, born in Rotterdam, settled in Maastricht after the Second World War and was primarily a “plein-air” painter.

The beautiful watercolor “Stokstraat in Maastricht” was made in 1944 by the Amsterdam watercolorist and draftsman Piet Spijker. The streets look very busy. Behind a fence on the sidewalk in front of the shop with the sign “Shelter” stand a man (seen from the back) and a woman holding hands. In the foreground children fight while some men watch, on the left the entrance to Moorenstraat. Spijker is known for its cityscapes in its own specific style.