Spotlight: The Geuldal seen through the eyes of others

Spotlight: The Geuldal seen through the eyes of others

Museum Valkenburg presents in collaboration with the Limburgs Museum the exhibition “South Limburg seen through the eyes of others”. Works from the collection of the Limburg Museum of non-Limburg painters who came to South Limburg are shown. Some stayed for a short time, others settled in Limburg for many years. We highlight a few top pieces. This time….

“The Geuldal seen through the eyes of others” 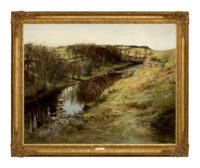 Pieter de Josselin de Jong (St-Oedenrode 1861 – The Hague 1906) studied in Antwerp and Paris, among others. He was successful in the art world from the start of his career. He also received awards at various world exhibitions. In this beautiful oil painting we see the river Geul in a rolling landscape near Cottessen (near Epen, close to the border with Belgium). There are mainly trees on the left bank, while the grassland on the right bank dominates.

Adriaan Herman Gouwe painted the Akerbos in Vijlen in 1914. Vijlen (municipality of Vaals) is the highest village in the Netherlands. Green and blue colors dominate this painting.
Herman Gouwe won the prestigious Prix de Rome in 1901 and traveled extensively. In 1905 he settled in Maastricht and lived there until 1910. After that he returned every summer to paint the Limburg landscape. He is counted among the Luminists, who try to represent the light through the use of color. 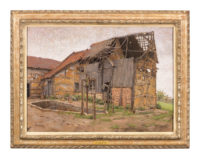 The two pastels by Johannes Cornelis van Ham from 1920 and 1930 are both situated in Epen. A typical Z-Limburg half-timbered farmhouse is partly in a state of disrepair. This farm type stands out well in the green hills of South Limburg. The skeleton of a traditional half-timbered farmhouse is made of wood, stones, straw and clay. Van Ham shows the beauty of decay here. 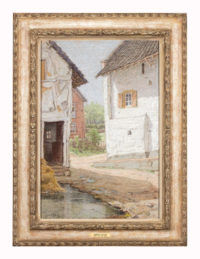 The second pastel also shows a building in the half-timbered house style. On the right we see a part of a white house.
Van Ham was born in Gouda in 1892 and was largely self-taught. He painted and drew in realistic-naturalistic style.