The accessibility of the quiet Valkenburg changed in 1853. In this year the city gets a station on the Maastricht-Aachen railway. In the early years, train journeys and holidays were only accessible to the “better-off class”. After 1880 these became more and more the nouveaux-riches of the industrializing Netherlands. Followed by the emerging middle class, people with a broader purse. The first hotels such as Hôtel de l’Empereur and Hôtel Croix de Bourgogne soon benefited.

Valkenburg is becoming a household name: charmingly situated, romantic and hospitable. A piece of abroad within the Dutch borders. More and more Dutch families come to marvel at the romantic sights in the Heuvelland. In 1885, the first tourist information office in the Netherlands was established in Valkenburg to keep the tourist flow on the right track. 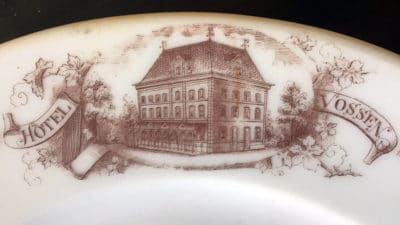 Meanwhile, the luxury hotels are popping up like mushrooms. Hotel Vossen is one of the first. Hotel Vossen was a chic and luxurious hotel, located on the corner of Houthemerweg (now Geneindestraat) and Nieuweweg. In 1893, the Ubaghs-Vossen family took over the hotel through public sale for F 42,000. and calls it “Grand Hotel Ubaghs-Vossen (old hotel Vossen)”.
The sons of the widow Vossen opened in 1895, Hotel Vossen (from Arnold Vossen) across the street (former hotel Kessels) and Hotel Vossen Bellevue (from Gustave Vossen).
Around 1920 the Engels family took over the hotel under the name Hotel Trianon. In 1977 it is demolished and replaced by the Bellevue apartment complex.

During the excavation in the Halder Park (2015) archaeologists find predominantly material dating back to around 1900. A number of bullet bottles, steam beer bottles, ointment jars, English import products and many other porcelain and bottle material from that time. The best thing about the history of Valkenburg is the material that can be directly linked to Valkenburg, such as hotel porcelain from Hotel Vossen and Hotel Ubaghs-Vossen.
The hotel porcelain was made by F.W Crefeld, Kobes and Welco porcelain, the dating is from before 1929 (after 1929 it was called Krefeld). The milk jug is marked with “Gebr.Bauscher Weiden (Bayern) / General agent Bert Muller Amsterdam”, Bauscher sold hotel porcelain in 1881, (Since 1927 this company was transferred to Lorenz Hutschenreuter until 1998, then it came into the hands of BHS AG Rosenthal 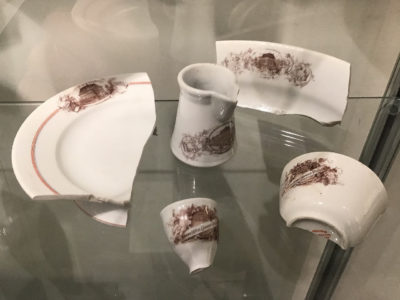 Leeuw Bier, AEB and Schutzmarke
Among the many bottles from that time is also a beer bottle of Schutzmarke Bier. The bottle has an image of a horse. 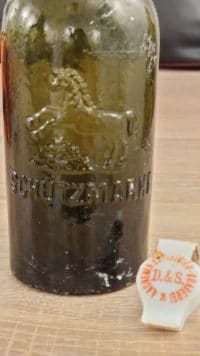 In 1871 a brewery, Dortmunder Brauhaus, started in Aachen. At that time there was a flourishing export to overseas continents. In 1886, the brewer opened a branch in Valkenburg in the former Kruitfabriek on Plenkertstraat (Dittman & Sauerland Actiën Brauerei). It was a strategic move to easily transport the beer to Rotterdam by train for export.

The official name was “Aachener Exportbier Brouwerij Dittmann & Sauerlander Actien Maatschappij”. On the well-known old bottles with the name Schutzmarke and a horse on it, there are also where in the neck “AEB” is written. However, the brewery was called the Valkenburgsche Leeuwenbrouwerij by various people. Presumably because the Dittmann family had previously been active at the “Löwenbrauerei”. The brewery is known with a “lion” as its logo. After the closure of the German company, the brewery relaunched on April 4, 1921 under the name Leeuw beer.

These and other finds are now on display in the museum during the exhibition in the Jacques Vonckzaal; “A look in the kitchen..”. Up to and including November 29, an overview can be seen of 25 years of the Valkenburg Archaeological Working Group, for more information look here: https://www.museumvalkenburg.nl/en/agenda/exhibition-a-look-behind-the-scenes/